When I last talked about FG, I discussed the physical guidelines that can help you decide you’re a curvy FG or a Soft Gamine. Today, however, I’d like to expand on the idea of a curvy FG, and discuss what I see as the two categories of Flamboyant Gamine.

Kibbe has, for the most part, done away with the middle categories of C, G, and N. The obvious result of this is that people who would have once found themselves comfortably in one of these middle categories now has to decide whether they fall on the yin or yang side of the scale. (Note: I am linking that post mainly for the chart. Some stuff in that post, especially about how I see myself, no longer applies.) This means that people who have just a little bit more Dramatic than Romantic in the composition of their Gamine are now Flamboyant Gamines.

This is actually a huge change. In the quiz, while I know some feel that it can only confuse you, it actually gives very good clues as to how the types are put together. If we look at FG, he says that FG is nearly equal A and E answers (Dramatic and Romantic) with extra B answers (Natural). These extra B answers ensure that even if you have more E answers than A answers, you’ll still be yang-dominant. Gamine is just an equal mixture of D and R, but if you had a little more D than R, you’d probably still fall into the Gamine category, rather than Flamboyant Gamine.

But now that G has been eliminated, those of you who have more D than R, with no N, would still end up in Flamboyant Gamine. There have always been people, such as Twiggy, who have seemed to lack N and ended up in Flamboyant Gamine. But they were exceptions. Now, there are lots of Flamboyant Gamines who don’t have N at all, and thus will look a little different. What the N does is widens. It adds a more mesomorphic figure. It may even add curves–I believe all curvy FGs are FGs with N. N is, after all, sharp D yang softened by some yin. Those without the Natural yang are the people who look more classically gamine, rather than the sturdier and wider FGs with N. 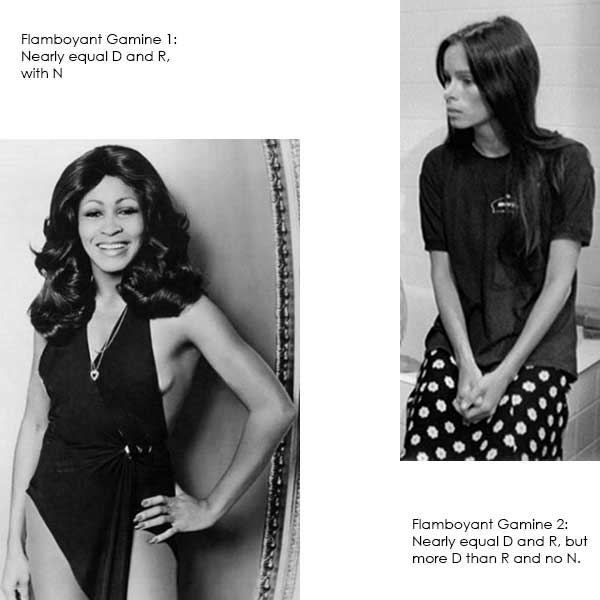 I am sure that you can find a similar phenomenon among the N types, C types, and SGs. For SG, for example, I think the general idea would be the same, with some SGs having moderate yin (D answers on the quiz) and some not. I just happen to have spent more time thinking about FG, and have observed the patterns in our FG Facebook group. The division is very obvious. I would love to hear your thoughts on this topic, especially if you’re in a type that had the middle type eliminated.