Of course, I think most readers of this blog wouldn’t even consider the possibility. 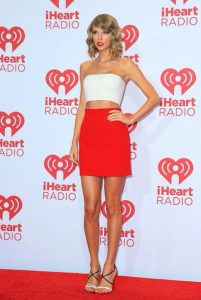 She is 5’10”, and we know that this height rules out either Gamine. Per my recent post, however, this is something that Merriam Style teachers in her Taylor Swift video, where she tries to make the case the 5’10” Taylor is a Gamine—and you can read my Kibbe FAQ to find out why this is nonsensical. Someone who is that tall is yang-dominant, not juxtaposition of yin and yang. (When I look at Taylor, I see length all over. Even if I didn’t know she was 5’10”, I don’t think my mind would go to Gamine anyway.)

Now, David doesn’t make a ton of very clear statements. But this is one thing he has been extremely clear about. Soft Gamine will not be over 5’5″, and Flamboyant Gamine can be a little taller, but not Taylor Swift tall, and if you understand his system of yin and yang, this makes total sense.

Unfortunately, every Kibbe Image ID seems to be subject to certain incorrect ideas about it. As a Flamboyant Gamine myself, the ones for Gamines are the ones that I feel most acutely. For us Gamines, one of these ideas that seems to pop up frequently in various ways is the idea that Gamines are somehow not distinct Image IDs that stand on their own with their own very particular yin/yang balances.

Traditionally, this has taken the form of the idea of Flamboyant Gamine being a “small D” or a “small FN,” which I have addressed before. But as I watched some Merriam Style videos after writing my last post, however, I realized that she has come up with an entirely new way of turning Gamines into Image IDs that are somehow lesser and not distinct yin/yang balances like the rest.

In this video (starts at around 1:55), she says that Gamines are basically “everything else”–a mixture that doesn’t fall into any category. If you feel like you don’t fit anywhere else, she explains, you may be a Gamine. She says they are very common (not true) and misunderstood (true, but not in the way she thinks, because she has misunderstood them).

In her answer in this video at around 9:08, however, it becomes clear why she believes that someone who is tall can be Gamine: she says she is a 5’7” Soft Gamine herself and her own confusion is partially why she made her channel in the first place. Yet as I mentioned above, David has been very clear about height for Soft Gamine. SG is nearly half yang, and if they are taller than 5’5”, that is too much yang for the “recipe” to be Soft Gamine. Of course someone who very strongly identified with a certain Image ID that is not available to them would want to make the system into one that allowed them into the Image ID they wanted to be. It happens all the time. (This is also why the idea of very yang TRs persists.) Resistance is incredibly powerful. If you want to be a taller SG very badly, it would make sense that you would try to find a way to justify it and say that 5’10” Taylor or a 6′ woman could be Gamine.

But really, my motivation here is to stop these incorrect ideas about Gamines in Kibbe’s work. Gamines are not: 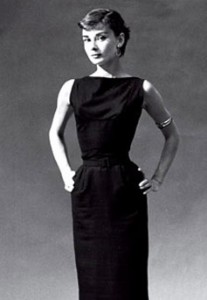 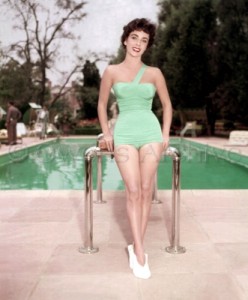 If you don’t have the physical copy of Metamorphosis and haven’t ever seen the pictures from the book, look at the image below. What type do you think this is? 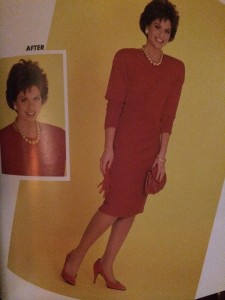 A monochromatic look? No line break? Maybe it’s some kind of classic, or even a dramatic.

Nope. It’s the Soft Gamine makeover from the book. You may be asking, “But where is the line break? Where are the cute details and the Peter Pan collar?” It doesn’t fit in with the popular image of Soft Gamine at all. But it has crisp details (the shoulders), interesting accessories (big red bead necklace, little gloves), and there is, in fact, a line break. It does not obey the popular rule for short women that you should have your hosiery and your shoe be the same color to create the illusion of a longer leg.

Kibbe himself, according to people who have seen him in person, seems to go back and forth on how useful the book is. Some he tells to ignore the book, some he tells to read it. But while the recommendations can be outdated (I don’t buy sweaters with shoulder pads!), I still find that the recommendations are very useful. It helps you understand the parameters of your type that you can do then use to create your own unique style.

What I would definitely avoid doing, and I think I have mentioned this before, is relying on Pinterest and Polyvore to get an idea of the way your type should use their lines. Even with my own Pinterest, I’m not entirely satisfied with how I represent the types, because I feel like I know my own type the best and the rest I usually just repin from other people. We end up with stereotypes like Soft Gamine=Ingenue and that Soft Natural=Boho. People who come back from Kibbe with these types assigned to them do not end up dressed how the type is generally represented at all.

I think that we tend to look at the types with a point of view that is too narrow. While there is debate in the Kibbe community right now about whether the book has any use at all, I think it’s still the best resource for understanding your type and the lines that it requires. Anybody else’s interpretation should only be considered once you have gotten to know your type well, and when you know what works or what doesn’t.

One of the notable things about Kibbe’s system is that it lacks the Ingenue category. If you look at the quiz, A answers are Dramatic, B are Natural, C is Classic, E is Romantic, and mixed A and E is Gamine. But he does not mention Ingenue, nor what the D category means, at all. The D answers correlate to the Ingenue answers for systems that do have this category. As someone for whom D answers predominate on the Kibbe test, this is something I have thought about a lot. I have seen D-dominate people be categorized as Soft Dramatic, Soft Natural, Soft Classic, Soft Gamine, and Theatrical Romantic. I am still more or less trying to decide between those five.

What to do with your D, however, is a topic for another day, one I’ll cover when I feel like I’ve figured myself out. What I want to discuss today is how Soft Gamine often gets conflated with Ingenue, and how they are, in fact, not the same, and shouldn’t be used synonymously. Kibbe himself has apparently said that no adult woman should dress as an Ingenue. Many of the modern interpretations of Soft Gamine that you’ll find on Pinterest and Polyvore, however, retain the sort of cuteness and innocence that you’ll find in Ingenue, and many people do, in fact, name their boards or sets “Soft Gamine/Ingenue.”

I think it’s important here to clarify the major difference between Soft Gamine and Ingenue, and that is the amount of yin. In McJimsey’s interpretation, the Ingenue is the polar opposite of Dramatic. In Kibbe, I would say that the polar opposite of Soft Gamine would actually be Dramatic Classic, since it has the opposite ratio of yin/yang and is blended (see my chart here to see what I mean). In Kibbe, Romantic takes the place of being the opposite of Dramatic, so I suppose that if Ingenue were even on the scale, it’d be off-the-charts yin.

Kibbe’s system also does not change with age. In McJimsey, and Carole Jackson’s Color Me Beautiful, a Gamine or an Ingenue will eventually mature into a Classic or a Natural (in a Gamine’s case) or a Romantic (in an Ingenue’s case). I think Kibbe’s system only really works for adult women, and being a Gamine is not something you age out of. Betty White, as a Soft Gamine, is a perfect example of this, I think. At 92, she still has the Gamine joie de vivre:

Soft Gamines are yin in size, yin in flesh, slightly yang in bone structure, with yang drive and charisma and yin charm. This is a far cry from McJimsey’s “artless and naive” Ingenue. A Soft Gamine is a force to be reckoned with. While there are some recommendations–peplums, bolero jackets, bouffant skirts–that can apply to both, a Soft Gamine does not need the ruffles and daintiness that an Ingenue does. A Soft Gamine is a grown-ass woman. 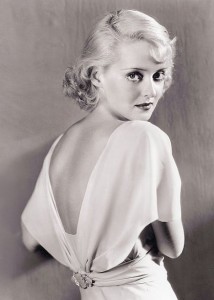 It’s because Soft Gamines are awesome. So let’s give these Soft Gamine Betty(e)s some respect, and stop confusing “Soft Gamine” and “Ingenue.”