Today, I will finally continue my series documenting the information in Belle Northrup’s 1936 article, “Art and Personality in Clothing Selection.”

Pagodas, the “cusped arches of Moorish doorways,” the decorative walls and balustrades of the Alhambra, and the Taj Mahal’s marble carvings and delicate mosaics are all yin. So are “prim little green-shuttered cottages of New England.”

Early Doric temples, the “massive columns of the Great Hall at Karnak in Egypt,” the masonry arches of Romanesque or Norman buildings, and the “white-pillared Georgian mansions of the [US] South” are all yang. Grain elevators of the prairies and modern industrial buildings lacking ornamentation are also yang.

Gothic cathedrals combine both yin and yang. Their “towering structure and vaulted heights” represent their yang, and their “slender pinnacles and lacelike carving” are yin. 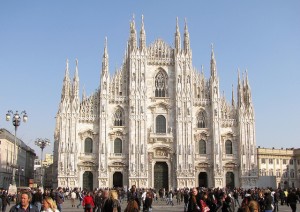 In art, Botticelli’s fragile figures, da Vinci’s subtle and tender faces, and Marie Laurencin’s pale, child-like women are all yin. The use of color gives a general impression of gentleness and delicacy.

Tintoretto, Rubens, Hals, and many modern artists use pigment in a very yang way.

Painting in the Sung period blended yin with yang. 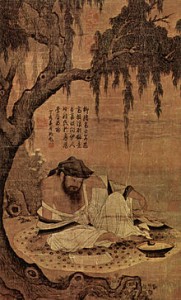 In early Greek sculpture, we see them in contrast to one another. An Ancient Greek dancer in bas relief is yin. “Juno, Hera of Samoa” is yang. Stone as a medium is essentially yang.

Egyptian queens and medieval women wore yang costumes, regal and dignified. The portals of Chartres have carved kings and queens of Judah in austere yang forms. Smaller carvings, such as this 14th-century “Virgin,” show this dignified costume in a yin way. The statue of Nefertiti is dressed in a yang way.

Medieval women’s soft veils were yin in color texture, and so were Renaissance women’s hairstyles and the embroidered necklines of the late Renaissance. Yin began to predominate in the 19th century. Fichus, lace, ribbons, ruffled sleeves, bonnets, and “the short, full skirts of Marie Antoinette’s time gave to women more piquancy and delicacy than was possible in the days of Charlemagne.”

Puritan dress was yang. Loyalists dressed in a yin way akin to the fashions in England and France.

In music, Debussy’s delicate strangeness is yin (listen) and the mighty sweep of a Beethoven movement is yang (listen). Chopin, Grieg, and MacDowell are yin, and Bach, Brahms, and Wagner are yang.

Graceful yachts are yin. Sturdy tugboats are yang. The Sheraton settee is yin, while the low-slung sofas of Northrup’s period are yang.

Next, I will cover yin and yang in women, featuring 1930s celebrity examples.