There are many different systems out there: Color Me Beautiful, Color Me a Season, 4×4… The system that I prefer, and the one I know the most about, is Sci/ART, so this series will talk about the seasons as defined by Sci/ART. I prefer it because I haven’t found a system with more than 12 seasons where I think the splitting of seasons, etc. is warranted, and the traditional four seasons is too simplistic. The palettes I see in the Sci/ART system are the ones I see repeated in nature, and the ones clothing manufacturers also seem to stick to, even though I doubt they are actually using these palettes to design their clothes and select fabrics. The fans themselves are beautiful to look at because they harmonize so nicely, and it is pleasing to the eye. I don’t get the same feeling when I look at palettes from other systems, apart from custom fans.

Sci/ART was developed by Kathryn Kalisz, and uses 12 seasons. Currently, Sci/ART, or something based on it, is practiced by several analysts who were trained by Kalisz. There is also the 12 Blueprints system, developed by Christine Scaman based on Kalisz’s work. There is a robust 12 Blueprints training program, so many of the analysts you’ll find who work with 12 Seasons are 12 Blueprints analysts. For the sake of clarity, I am using the term to refer to the system as it is currently practiced, although some things may differ from how they were in Kathryn Kalisz’s time. I am using it to distinguish the systems based in her work, vs. Color Me Beautiful’s 12 Seasons, for example. 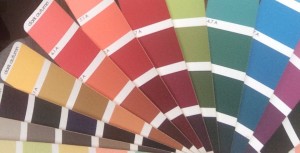 If you would like to see how these palettes look, you can see them on this page on the Invent Your Image website. Lisa K. Ford is a Sci\ART analyst who has created her own digital images of the palettes, and since they were created for the screen, they are the most accurate renditions of the palettes you’ll be able to find, outside of holding one in your hand. The information about where each season can be found on the scales of hue, value, and chroma can be found on these palettes.

Just reading over the list, several things should become clear to you. Each season is at the extreme end of the scale for only one characteristic. No season would be, for example, both high in chroma and at the highest level of warmth. Also, no season is medium in hue. The seasons are either warm or cool, but seasons that are not at the extreme level in hue are called “neutral seasos,” since they have a slight influence from another season in the opposing hue group.

The rest of the season are neutral seasons. This means they have both warm and cool influences.

You may have noticed that the seasons flow into each other, and even correspond to months of the year. True Winter is January, February is Bright Winter, and then onto Bright Spring in March and the rest of the year, ending with Dark Winter in December. The seasons reflect the changes of the seasons and the way the world looks in climates that experience the four seasons in the Northern Hemisphere.

An important aspect to the Sci/ART is that the hue/value/chroma descriptions belong to the colors that flatter a person, not the person. What I mean by this is that you will not necessarily know whether a person is Bright, Light, Dark, Soft or pure Warm/Cool just by looking at them. A Bright person will, in most cases, not have platinum blonde or jet black hair and skin that contrasts with their hair. In fact, their hair may look downright mousy until you put them in the correct colors, and the multi-dimensional quality of their hair (which is an effect that happens with all seasons) can come through.

Same with the Dark and Light Seasons. There may be people in other seasons who look darker than someone who drapes as a Light, and same with Dark. While the representations of Light celebrities are almost all blondes, and no one would think to put a blonde in a Dark season collage, when you look at people who drape these seasons, that is not the case. There are Dark Autumns and Dark Winters who are natural blondes with blue or green eyes and pale skin.

What it means for those of us who are in the Dark seasons is that, since Dark is the dominant characteristic of our season, we can wear most Dark colors without a problem that anyone but a trained analyst would notice, but that everyone around us will notice an issue with Light colors unless they harmonize perfectly with our season. I’m a DIY Dark Autumn, and put me in a Light color, and I will look very puffy, and either extremely red or like I have a beard of white powder. It doesn’t matter how much sleep I’ve gotten; I’ll look like I’m coming off a three-day bender. If I am put in another season’s dark colors, I’ll look a little “meh,” but nothing quite so terrible. Nobody would have put me in anything even remotely close to a Dark season until I started testing colors. It’s all about what the colors do to you, and you really have no information until you can see colors on you.