This is occasional series I’ve started where I give my best guess on a celebrity’s Kibbe Image Identity–I look at their roles and image, versus an analysis of their physical features and body type. Last time, I decided that Natalie Portman is SG. This time, I’m going to reach a similar conclusion about an actress who is rather similar to her, with a similar debate about her type. 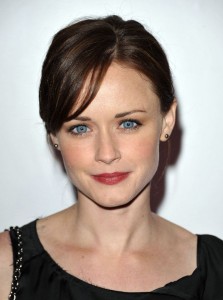 I’ve never seen Gilmore Girls until recently, when I decided to start binge watching it while laid up in bed with a upper respiratory tract infection. So far, I’m up to season four, and for me, the clues about Alexis’s type come less from what kind of character Rory Gilmore is and more about what other people on the show say about her.

One of the ways David Kibbe characterized gamines in general in our FG Facebook group is that “you can’t be sure if she is a waif under the bridge… Or a princess in waiting!” I think you’d be hard-pressed to find a modern example of an actress that fits this characterization better than Alexis. 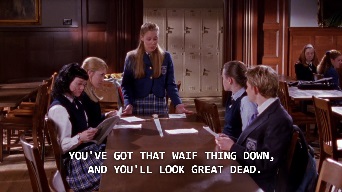 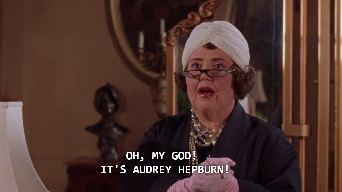 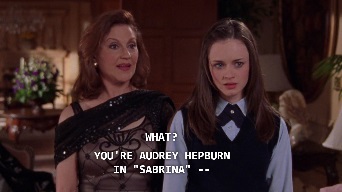 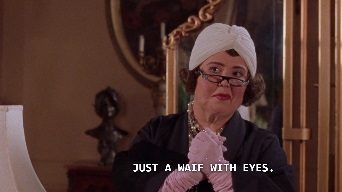 It is, in fact, easy to put Alexis into Audrey’s roles. The princess out for a day of fun in Roman Holiday, the bookstore intellectual-turned-model in Funny Face… She’d be perfect. She has similar qualities of vulnerability, charm, and intelligence that make her appealing.

After thinking about it, it’s hard for me to understand why her Flamboyant Gamine Image ID isn’t more obvious to people, and I have no idea why she is put into Dramatic Classic and Soft Classic on Pinterest. She is a deer, which huge eyes and a surprisingly long body for her face (5’7″). I could easily seen her as a 1960s teen sensation like Twiggy.

Classics, to me, have a more solid presence on screen. In fact, I think that if Rory Gilmore had been played by a Classic, it would have been too much. Of course the Grace Kelly facsimile got in Harvard, Princeton, and Yale; had every boy fall in love with her at first sight; and had mega-millionaire grandparents! But that little added Gamine charm helps to make her more appealing on screen (not that Classics don’t have enormous appeal, but at some point, there is just too much perfection).

Going off Kibbe’s statement that breakout roles are a good way to see what Image Identity a certain star is, I thought that it would be an interesting to experiment to take actresses whose Kibbe Image Identities are the subject of some controversy and try to decide where they fit based not on their physical features, but how they are cast and what roles made them stars.

The first star I thought of was Natalie Portman. Natalie is someone I’ve seen listed either as Soft Gamine or Soft Classic, and I can see the case for both. She looks great in short hair, and people will sometimes try to make a physical comparison between her and Audrey Hepburn. 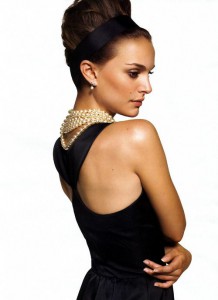 Classic comes in simply because she is just very pretty, and I could see casting her in a movie where she plays, say, a princess. (But of course, Audrey’s breakout role was Roman Holiday, so who says that the princess is always a classic Grace Kelly type?)

Like Mila Kunis, Natalie’s breakout role came very early in her life. She played Mathilde in Léon: The Professional at the age of 12. The Wikipedia article for the film describes her as “a twelve-year-old girl who is smoking a cigarette and sporting a black eye. Mathilda lives with her dysfunctional family in an apartment down the hall. Her abusive father and self-absorbed stepmother have not noticed that Mathilda stopped attending class at her school for troubled girls.”

Her next major role was as Queen Amidala in the Star Wars franchise. I think that outside of Star Wars fans, this isn’t really a signature role for her, but I think it presents an argument for Kibbe’s Gamine dichotomy: you aren’t sure whether they’re a waif under the bridge (her role in Léon) or a princess… In this case, a queen.

The role I think of when I think of Natalie Portman is Sam in Garden State, which is now a movie people make fun of (and she is kind of embarrassed by), but she basically plays the ultimate Manic Pixie Dream Girl.

I would say that this combination of roles early on in her career–the waif/princess dichotomy, the MPDG–puts her solidly as a Gamine base over a Classic one. And looking at her height and appearance, I’m going to go with the yin side of things.

If there is another star you’d like me to look at, let me know!