Watching Bonjour Tristesse led to a shift in how I see my style that I haven’t really fully reconciled yet. In conversations with other people, I’ve realized that I’ve been going too hard in the yang direction, and ignoring my yin. I’m not a Dramatic. I need both, in almost equal amounts, and it’s important to keep that in mind.

I connect with the Jungian archetype of Creator, so I downloaded the Mermaid guide. Some of it appealed to me, but “fun and frothy yet elusive” didn’t really seem to get to the core of who I am. The FB 9, I think, are supposed to really address something deep inside you. Nymph did to a point, with the emphasis on acquiring and dissemninating knowledge, and for a while, I thought Woodland Puck was it. It was a punky version of Nymph. But I still struggled because it seems like that’s what I was doing all along, but there were still pieces that weren’t being addressed. When I started considering Mermaid, I figured that maybe Sea Puck would be it. I concentrated on thinking about Kibbe and DYT, and let Fantastical Beauty go for a while.

A couple of days ago, Kati put up a video, and I hope it becomes a series. In the video, she makes a cocktail and then discusses Angel and its subtypes. (If you’re just interested in the Angel stuff, skip to around 8:30):

I realized that for me, words are the center of what guides me. Writing, translating, communication. Iris, a bolder, more aggressive Angel, with an emphasis on carrying messages, is something that connects to me on a deep level. (Skip to 12:00 in the video for Kati’s description of Iris.) 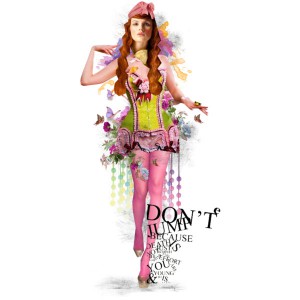 I’ve even been cast as Iris in a play before, in a rainbow minidress sprayed with glitter.

I see Iris as something that helps to iron out the things I’ve been struggling with, style identity-wise, over the past few months. It’s a reminder to me to address the dark and light, the yin and yang, and to not go too far in either direction, while also remaining myself.