In July, I wrote a post called “Banning Black from My Wardrobe”. I am here to give an update on how it’s working out.

I am sad to say that it, well, hasn’t. There are several reasons for this. The first is that while I was certain I was Light Spring when I wrote the post, since then, I’ve had moments of thinking, and have been told by others online (although I realize that Internet advice is in no way a substitute for draping in person) that I am anything from a Bright Spring to a Soft Autumn. So even if I had stopped buying black things, I’m not sure what I can replace it with until I get draped.

The other major issue is that Flamboyant Gamine clothes, especially at my price point, come in winter colors, for the most part. So often is seems like I would have to choose to between something in a color that appears flattering or lines that are flattering.

I know that whatever season I am, it is not likely a season that should wear black in a big block near the face. Yet with these two major factors in play, I find myself not buying any less black than before. I did not buy the light brown leather jacket. I bought the black one. It’s a sickness, I know. But with things like leather jackets, well, can a brown one ever even touch the cool factor of a black leather jacket? 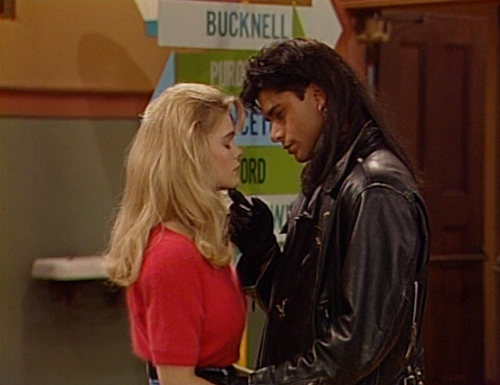 So I think I will return to this experiment once I’ve actually been draped, and I’ll know what the most effective neutrals are for me to replace black with. I also have to get over my love of black, and realize that a similar, yet more flattering, neutral will most likely have the same effect, if I keep to my FG guidelines. Also, all FGs should campaign major retailers to make FG clothes in all the seasons. Until then, I’ll just concentrate on dressing according to FG guidelines, choosing colors that I think are flattering when possible.